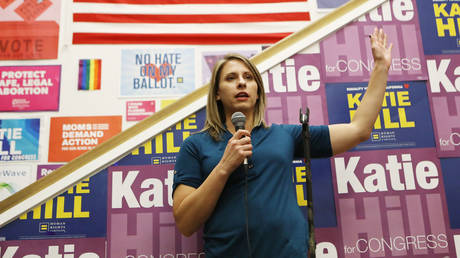 Los Angeles Judge Yolanda Orozco sided with the Daily Mail as she ruled on Wednesday that naked images of Hill taken by her ex-husband Kenny Heslep and leaked to the paper “were a matter of public issue or public interest,” since they were indicative of Hill’s “character and qualifications for her position.”

Orozco noted that the photos in question showed Hill with a campaign aide, with whom she reportedly had an affair at the time, as well as appearing “to show [her] using a then-illegal drug and displaying a tattoo that was controversial because it resembled a white supremacy symbol.”

The judge rejected the argument by Hill’s attorney that the paper could have just limited its scoop to describing the images without publishing them, calling such reasoning “unpersuasive.”

“The fact that information to be gleaned from an image may be disseminated in an alternative manner does not equate to a finding that the image itself is not a matter of public concern,” Orozco said.

The story made headlines in October 2019, and ultimately resulted in Hill’s resignation despite the outpouring of support she received from her own party and the mainstream media that rallied to her defense. Facing accusations that she had multiple affairs on the job, including with her legislative director, Hill admitted to a relationship with one female campaign staffer, but rejected any other allegations of inappropriate behavior. She vowed to take the British tabloid, which exclusively published the images, including the one showing her smoking a bong naked and spotting what appeared to be a swastika tattoo, to court, arguing she was a victim of “revenge porn.”

In the wake of the scandal, Hill reinvented herself as an advocate for women’s empowerment who was unfairly targeted for political reasons. Last year, it was announced that her memoir would be turned into a film, starring The Handmaid’s Tale’s Elisabeth Moss. However, her return to the spotlight was overshadowed by allegations of abuse posted to her dormant but verified Twitter account in October last year. A series of messages, purportedly penned by “former staff,” alleged that Hill was involved in “workplace abuse and harassment.”

Hill slammed the court’s decision to take the newspaper’s side, arguing she was “up against a deeply misogynistic system that has to change.”