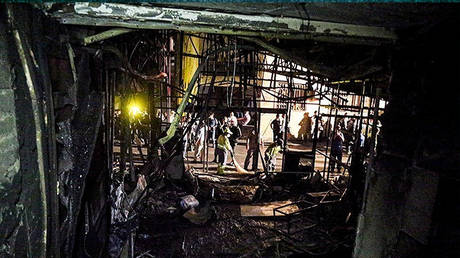 Iran has vowed consequences for any foreign power that might have been involved in the recent incident at the Natanz uranium-enrichment site. The blast came amid a series of incidents at other Iranian vital sites.

“It is still too early to talk about and make any judgment regarding the main cause and reason for the blast [in Natanz], and relevant security bodies are investigating all the details of the incident,” Iranian foreign ministry spokesperson Abbas Mousavi said on Friday to reporters.

If they conclude that foreign elements have been involved, they will announce it, and there will be consequences.

Various media reports have floated the idea that the nuclear site could have been the target of an Israeli or a United States cyberattack.

The country’s authorities have previously said they have determined the true cause of the incident but “due to security considerations” will provide further details at a “convenient time.”

Israel’s Defense Minister and Alternate Prime Minister Benny Gantz dismissed the idea on Sunday, saying his country can’t be blamed for “every incident” that happens in Iran. However, Israeli Foreign Minister Gabi Ashkenazi had a different message, saying “Iran cannot be allowed to have nuclear capabilities” adding that “we take actions that are better left unsaid.”

On July 2, Iran announced that an unspecified incident has damaged a shed at its Natanz nuclear enrichment facility, located in the country’s central region of Isfahan. The plant is considered integral to Iran’s enrichment programme.

Iran reported no casualties and said that the enrichment process at the facility has continued as usual. However, it still announced that one of the buildings at the site was severely damaged.

Natanz facility itself had already been a target of a cyberattack almost ten years ago in a sophisticated operation that destroyed as many as 1,000 centrifuges. The US and Israel are widely suspected of launching the assault.

To appease the international community and get crippling sanctions removed, Iran’s nuclear activities were supposed to be regulated by a 2015 agreement (JCPOA) signed with six world powers, commonly known as the ‘Iran Deal’. The accord, however, was unilaterally abandoned by Donald Trump’s administration in 2018. After that Tehran reneged on its agreed limit on uranium enrichment.