‘I told you so’: Ghoulish Greta Thunberg meme used to troll Italians over flooded Venice 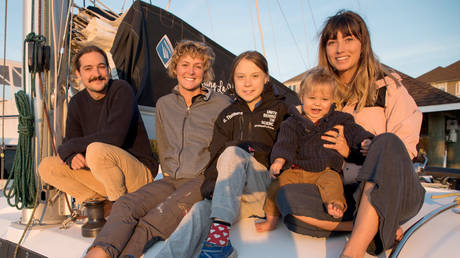 As Venice reels from the city’s second-highest floods in 50 years, some online have chosen to make light of the situation, sharing a meme of Greta Thunberg with the caption: “I told you.” Needless to say, this irked many online.

The highly divisive 16-year-old climate activist doesn’t even need to say anything for someone, somewhere to be triggered by her, or in this case a s**tpost in extremely poor taste.

While Thunberg is sailing across the Atlantic on a yacht with two YouTubers, bought with money earned from working on “offshore on oil rigs and in the mines of Western Australia,” Italians are incensed at a photoshopped picture of the activist in the flooded St. Mark’s Square in Venice.

Many felt the joke was in poor taste, as the city struggles to deal with historic flooding. “You can also avoid sarcasm with such a dramatic situation,” “Nice but there is little to laugh [about]: At 1.87 the water in reality would reach beyond the head,” and “it’s not funny, you idiots!” were just some of the irate responses to the meme.

When some online commentators sought to bring the real Greta’s attention to the situation in Venice via her own Twitter timeline, they were quickly blasted for climate hysteria.

Well, "Acqua Alta" in Venice is a very common event.
Shame on you for trying to drive clima hysterics with it. pic.twitter.com/P6fHriImnv

Others with a darker sense of humor joined in the fun with their own macabre Venetian memes.

Some went one further, suggesting the city could, in fact, monetize the flooding to earn money from stranded tourists.

“Free rescue for residents, for tourists there is instead a ticket of 50 euros for the standard rescue and 100 for the VIP rescue with the gondola. Major credit cards accepted,” one person commented.

The “apocalyptic” flooding has claimed at least two lives and caused damage estimated to be in the tens of millions of euro. It’s the fourth time the city has suffered severe flooding in the past 20 years.