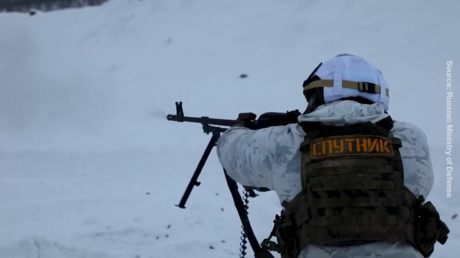 Warships from Russia’s Northern Fleet have cruised into the Arctic Ocean for training exercises, military chiefs have announced, as part of a series of naval drills that come amid growing tensions with the West.

In a statement on Wednesday, Russia’s Ministry of Defense revealed details of the mission in the Barents Sea. The armada includes the missile cruiser Marshal Ustinov, the frigate Admiral Kasatonov, the large anti-submarine ship Vice-Admiral Kulakov, and a number of support vessels.

During the exercises, the naval group will practice ensuring the security of sea lanes and areas of Russia’s maritime economic activity in the region in case of crisis situations, the statement reads.

According to the Russian Armed Forces’ training program for 2022, a chain of drills will be held in January-February. The main focus of the exercise is to practice the actions of naval and air forces to protect Russia’s interests in the world’s oceans, as well as to counter military threats to Moscow at sea.

The drills will see sailors set course from Russian territory from important areas of the world’s seas. Individual exercises will also take place in the Mediterranean, the North Sea, and the Sea of Okhotsk, in the northeastern part of the Atlantic Ocean and in the Pacific Ocean.

More than 140 warships and support vessels, over 60 aircraft, and about 10,000 servicemen are planning to take part in the large-scale mission.

The drill comes shortly after NATO allies and partners announced that it will soon stage massive wargames in the European Arctic, involving the US Navy’s Carrier Strike Group 8, amid heightened tensions between the West and Russia. The Cold Response is scheduled to launch in March and will bring together “35,000 soldiers from 28 nations,” the American mission said last week.

In late November, marines from Russia’s Northern Fleet held tactical firing drills in the frosty Murmansk region in the wake of Latvia confirming that it was commencing its ‘Winter Shield’ military exercises alongside troops from the US-led military bloc.

Russia has set its sights on maximizing the use of new channels for shipping as Arctic sea ice melts away year by year, having announced a target for at least 80 million tons of goods to flow through the waters by 2024.

However, the US previously hinted it could kick-start ‘freedom of navigation’ patrols to challenge Moscow’s dominance. At the beginning of 2021, then-US Secretary of the Navy Kenneth Braithwaite said, “you will see the Navy operating again in a more permanent manner above the Arctic Circle,” adding that Washington will “operate more assertively” to counter the growing Russian presence.