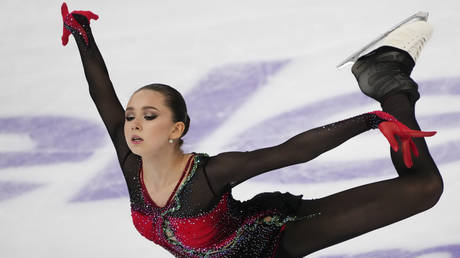 Russian figure skater Anastasia Guliakova has backed calls for an increase to the age limit in senior women’s competition, saying young stars find it easier on the ice.

Norway recently renewed its bid for a change to the current rules, which allow girls who are 15 to compete at senior International Skating Union (ISU) level.

Norway’s skating association has resubmitted proposals to the ISU to raise the limit to 17 for men and women in figure skating and to 16 for dance duets and sports couples.

Elsewhere, there has been criticism that young skating stars tend to shine intensely for brief periods before burning out before they are even out of their teens.

There were dismissive responses to the Norwegian proposal from some in Russia, including legendary figure skating coach Tatiana Tarasova.

However, one Russian in favor of the step is 19-year-old Guliakova, who made her senior debut in 2018 and won the Warsaw Cup the same year.

She has since finished third at last year’s Rostelecom Cup in Moscow and was due to compete at this month’s Winter Universiade in Switzerland before it was canceled due to the pandemic.

Guliakova is now preparing for the Russian Championships in St. Petersburg later in December, where she will face a host of young rivals.

“I think it would be correct. Even now, girls born in 2007 are skating at the stages of the Russian Cup,” Guliakova told Championat on a possible age limit change.

“You don’t feel entirely at ease. These skaters are young, they find it easier.”

Approaching the Beijing Winter Olympics in February, there is an intense battle among Russian skaters for the three spots on the team for the ladies’ singles.

That includes the prodigious 15-year-old Kamila Valieva, who has dominated in her debut season in the senior ranks, winning ISU Grand Prix events in Canada and Sochi and setting a host of world records along the way.

On current form, Valieva is hotly tipped for the Russian title as well as Olympic gold in Beijing.

Valieva seems nailed on for a place in the Russian team, while 24-year-old Elizaveta Tuktamysheva considers to produce impressive displays to challenge her younger rivals.

Elsewhere, 15-year-old Maiia Khromykh and 17-year-old pair Alexandra Trusova and Anna Shcherbakova are also seen as being in strong contention.

Speaking on her own aims for the Russian Championships in St. Petersburg, the city where she is based, Guliakova said: “There’s a lot of competition now, so I set myself the goal of going out and achieving my maximum, skating cleanly and getting my points.”