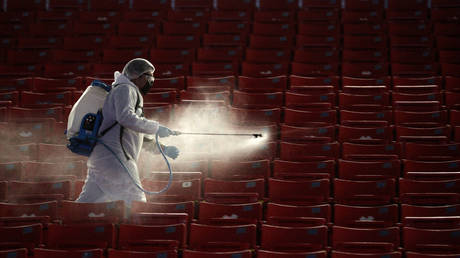 Passengers travelling on a private flight from South Africa to Moscow have tested positive for coronavirus, Russia’s health watchdog has announced, raising fears the Omicron variant may have entered the country.

On Friday, Rospotrebnadzor’s press service revealed that two passengers had traveled on the overnight flight and subsequently tested positive for Covid-19 after carrying out PCR tests.

“Biological material from passengers is being tested at two research laboratories. Information on the strain of the coronavirus infection is being established,” the service said.

The two passengers were sent into quarantine on arrival and are currently hospitalized, the health watchdog said. Everyone who was on board is to remain in isolation for 14 days.

The private journey was organized by a fitness company that runs sports camps in South Africa to take Russians out of the country due to the cancelation of regular flights, with seats going for around $17,000 a pop for people desperate to get home. A total of 25 Russians were on board, but the company’s chief refused to say how many were paying passengers.

Border guards greeted the arrivals in protective suits, while some members of staff at the airport appeared to be wearing plain surgical masks rather than N95 respirators when they came onboard the flight, as shown in photos shared online after the plane landed.

Omicron was first detected in southern Africa last month and has since made its way across different corners of the world. Scientists have raised the alarm over the mutant strain, which has 32 mutations of spike protein. Dr. Tom Peacock, a virologist at Imperial College London, said that “this could be of real concern.”

Meanwhile Anatoly Altshtein, a Russian virologist at the Gamaleya Research Institute of Epidemiology and Microbiology, which pioneered Russia’s Sputnik V jab, said on Monday that its high number of spike mutations means the virus has an unstable genome, meaning it becomes “less dangerous…an overwhelming number of mutations leads to a weakening of the virus’s ability to cause disease.”