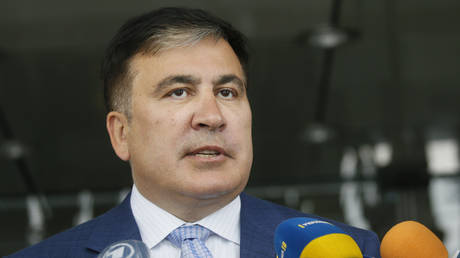 Georgian police have stormed the main office of the opposition United National Movement (UNM) and detained its leader Nikanor (Nika) Melia. The politician is being accused of inciting riots in the capital two years ago.

A crowd of supporters tried to prevent Melia’s arrest on Tuesday. The officers broke into the UNM’s office in the country’s capital Tbilisi and seized him.

Overall, 21 people were detained in clashes with police, the First Channel TV station reported, citing the Interior Ministry. The country’s prison service confirmed to the channel that Melia has been taken into custody.

UNM was founded by Mikheil Saakashvili who seized power in 2003 as a result of the so-called Rose Revolution. He was elected president the next year and ruled Georgia until 2013. Saakashvili left the country shortly afterwards, and several criminal cases were launched against him. UNM lost power in 2012.

Under Saakashvili’s rule, Georgia attacked the breakaway region of South Ossetia in 2008, triggering a war with Russia.

Melia is being accused of incitement to violence during the June 2019 riots in Tbilisi. He was initially released on bail, but later violated the bail conditions by publicly taking off his ankle monitor last year. The politician argues that the prosecution against him is unfair.

A new bail of 40,000 Georgian lari ($12,000) was set, but Melia refused to pay it. MPs then voted to revoke Melia’s parliamentary immunity on February 17, and a court ordered for him to be detained the next day.

@UNMGeorgia Chair @NikaMelia5 has been arrested this morning in a police raid of the party HQ involving hundreds of patrol police and special forces. Pepper spray was used against the opposition leaders and supporters pic.twitter.com/7XL0nzg4xq

Newly-appointed Georgian Prime Minister Irakli Garibashvili said that all citizens must follow the law, regardless of political affiliation. The UNM, meanwhile, is holding a protest rally outside the main government building later on Tuesday, demanding for Melia to be released.

Melia’s case has led to a full-blown political crisis. Garibashvili’s predecessor Giorgi Gakharia resigned as PM on February 18, expressing hope that the move would ease tensions in the country.

The 2019 riots were sparked by the visit of Sergey Gavrilov, a Russian MP from the Communist Party, to Tbilisi. The opposition was enraged that Gavrilov, who was participating in a religious-themed meeting held in Georgia’s parliament building, was sitting in a chair reserved by protocol for the speaker of the parliament.

Moscow responded to the riots by banning Russian airlines from transporting Russian citizens to Georgia.