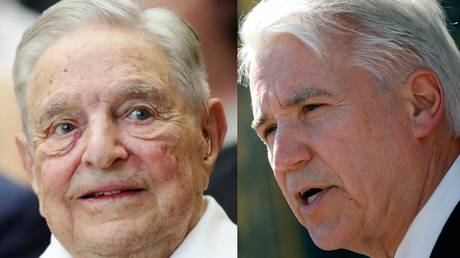 The new Los Angeles County prosecutor, elected with funding from billionaire George Soros, has inflamed tensions over his left-wing policies by calling family members of a murder victim too uneducated to “keep their mouth shut.”

“It’s unfortunate that we have people that do not have enough education to keep their mouth shut for once so we can talk,” District Attorney George Gascon said Friday, outside a courthouse in Pomona, California.

BREAKING: We've obtained video of LA D.A. George Gascon at the Pomona courthouse today where he can be heard saying "It's unfortunate that some people do not have enough education to keep their mouth shut so we can talk" as the family of a murdered victim yells at him. @FOXLA pic.twitter.com/IkHVhhp25u

A woman in the crowd responded by saying, “My son can never speak again because he was murdered. He was kidnapped, tortured and murdered. My son matters.”

Gascon later issued a statement to Fox 11 Los Angeles, saying he didn’t know who was yelling while he was trying to speak. “I did not understand what they were yelling about until later, let alone that they were victims,” he said. “Regardless, it’s not how I should have reacted.” He added that he plans to contact the family to “hear them out.”

The 65-year-old prosecutor, who was born in Cuba and previously was San Francisco’s DA, took office in Los Angeles earlier this month, after being elected with more than $2.5 million in campaign funding from Soros, who has helped install far-left prosecutors across the US. Gascon quickly angered families of crime victims by announcing such policies as banning the death penalty, stopping use of cash bail and directing prosecutors to help criminals who were sentenced too harshly in the past win reductions to their prison terms – even as they struggle to keep up with surging crime.

Gascon also banned prosecutors in the nation’s largest DA’s office from seeking sentences of life in prison without parole in especially heinous cases – those involving “special circumstances.” One beneficiary of the new policy is Rhett Nelson, who allegedly murdered Russian snowboarding star Dmitry Koltsov and Deputy Sheriff Joseph Gilbert Solano in June 2019. About an hour after leaving Koltsov to die on the sidewalk, Nelson allegedly shot Solano in the back of the head while the deputy waited in line at an Alhambra fast-food restaurant.

After public backlash over his decision, Gascon said on Friday that he would allow for use of special circumstances in certain types of cases, including hate crimes and cases involving child or elder abuse. Killing a law enforcement officer is still not considered a special circumstance by Gascon.

The DA’s office is moving forward with dropping special circumstances in cases that don’t fit Gascon’s exceptions to the rule. That provision was dropped Friday in the case against the five men who allegedly kidnapped, tortured and murdered 20-year-old Julian Andrade in 2018.

The suspects allegedly abducted Andrade because they thought he had stolen some of their marijuana. According to prosecutors, the men repeatedly beat and stabbed Andrade, then drove up into the mountains northeast of Los Angeles to dump his body. On the way, they discovered that he was still alive, so they stomped on his head. They then threw him off a cliff, but one of the suspects had to go down to finish him off after hearing him still struggling.

Andrade’s mother, Desiree Andrade, told Fox 11 Los Angeles that the alleged killers smirked in court on Friday as the special circumstances in the case were dropped. They reportedly could be eligible for parole in as few as 20 years. “This is all sick,” the victim’s mother said. “I felt let down by this justice system.”

Conservative commenters said Gascon’s putdown Friday of those who were yelling at him illustrated his lack of concern for crime victims. “This is who they are,” author Mike Cernovich tweeted. Lawyer Harmeet Dhillon said the scene showed “Gascon’s ugly contempt for victims, loud and clear.”

This is who they are. https://t.co/vY9EccxpYW

Filmmaker Dinesh D’Souza agreed, saying, “Just when you think things can’t get any worse in Los Angeles . . . .” Another observer said, “I feel horrible for these families, but how do these Soros guys get elected? What does this say about the people of LA?”

WATCH: Just when you think things can't any worse in Los Angeles…. https://t.co/vOYg8sLiDU

I feel horrible for these families…. but how do these Soros guys get elected?? what does this say about the ppl of LA