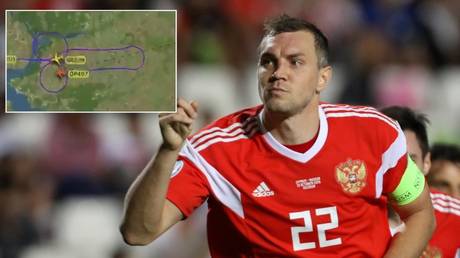 Russia’s Pobeda Airlines has been accused of violating safety measures and putting passengers at risk after pilots traced a giant penis in the sky in their flight path, in apparent support of national team captain Artem Dzyuba.

A plane which was going from Moscow to Ekaterinburg on November 11 diverted from its standard trajectory to make additional loops, creating a giant phallic sky drawing.

The move was apparently made in support of Dzyuba who was embroiled in a huge scandal after a video of him pleasuring himself leaked online.

Russian federal airline authority Rosaviatsiya who were investigating the incident accused the pilots of breaching safety rules saying the penis-shaped path could have posed a threat to the 102 passengers aboard.

“The plane’s maneuver was not connected with safety precautions, but was a clear violation of safety standards by Pobeda management who ignored top priorities of safe flights,” the report said.

It remains unknown whether the pilots of the remarkable flight will be punished for their actions with Rosaviatsiya recommending Russia’s flagship carrier Aeroflot, which owns low-cost Pobeda, to consider dismissing the airline’s management in the wake of the ‘penis’ flight incident.