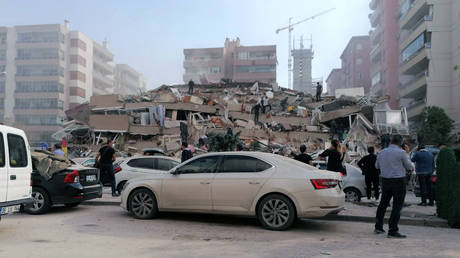 The wall and part of the roof of an Orthodox church on the Greek island of Samos caved in during Friday’s deadly earthquake, which also triggered a ‘mini-tsunami’ that led to localized flooding in coastal areas.

At least four people were killed and 120 injured in the earthquake, which struck off the Turkish coast in the Aegean Sea. The quake was felt on both shores of the sea, and in Istanbul and Athens.

The Church of the Dormition in Neo Karlovasi on the Greek island of Samos partially collapsed as a result of the temblor. Shocking photos from the scene show the damage the quake wrought on the beautiful building.

“People are panicking and have spilled out into the street,” Samos Deputy Mayor Giorgos Dionysiou said.

Dionysiou confirmed numerous, mostly old buildings had been damaged in the quake, but added that, so far at least, there had been no reports of injuries on the island.

However, coastal areas on Samos were struck by a miniature tsunami, which flooded low-lying areas, adding insult to injury for an already shaken-up local population.

The mayor of eastern Samos, George Stantzos, told reporters the authorities were working to “organize the situation.” “We are on the side of the residents. The next hours are crucial,” Stantzos said.

A live stream by a local media outlet showed cracks in multiple buildings, as concerned residents took to the streets as a precaution in anticipation of aftershocks.