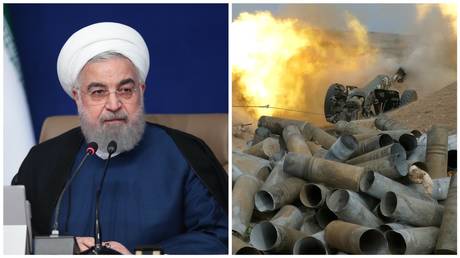 Russian President Vladimir Putin has called the ongoing military face-off in disputed Nagorno-Karabakh a “tragedy” and has indicated his willingness to honor Russia’s long-standing mutual defense treaty with Armenia, if required.

Speaking to the Rossiya TV network, Putin noted that two million Azerbaijanis and over two million Armenians live in Russia, and that “a huge number of Russian citizens maintain close, friendly and even familial relations with both republics.”

“This is a tragedy,” the president said. “We are very worried, because Azerbaijan, Armenia, and Nagorno-Karabakh are all territories inhabited by people who are not strangers to us.”

Although Russia acts in an official capacity as a meditator of the Armenian-Azerbaijani conflict, Yerevan and Moscow are officially allied as part of the Collective Security Treaty Organization (CSTO), along with Belarus, Kazakhstan, Kyrgyzstan and Tajikistan. According to the organization’s agreement, aggression against one CSTO member is perceived as aggression against all. Therefore, if Azerbaijan attacks Armenia territory, Russia is obliged to help out.

“As you know, Armenia is a member of the CSTO, and we have certain obligations to Armenia under this agreement,” Putin explained. “To our great regret, the fighting is still going on, but it is not being conducted on the territory of Armenia.”

The president noted that Russia will continue to discharge all its obligations under the treaty, and has urged Yerevan and Baku to agree on a ceasefire.

Along with US President Donald Trump and French President Emmanuel Macron, Putin last week called for “an immediate cessation of hostilities between the relevant military forces.” Russia, the US, and France are chairs of the OSCE Minsk Group, which is tasked with ending the Armenian-Azerbaijani conflict.

The dispute between Azerbaijan and Armenia is decades old, with both countries believing they have strong claims over Nagorno-Karabakh. The region is internationally recognized as part of Azerbaijan, but is primarily populated by ethnic Armenians. Baku considers the enclave to be illegally occupied by Armenia. In the past fortnight, the war has again flared up.