'I hope I can make him proud': US Open champion Naomi Osaka dedicates win to 'inspiring' Kobe Bryant 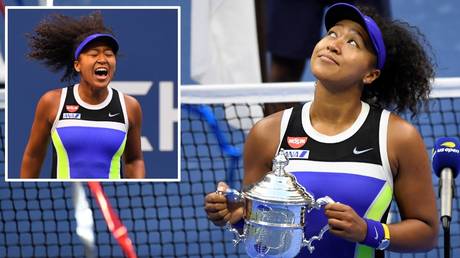 Victorious US Open champion Naomi Osaka says that she hopes to keep the legacy of her friend Kobe Bryant alive as she dedicates her win at Flushing Meadows to the NBA great who passed away in a helicopter accident in January.

22-year-old Osaka came back from a set down against Victoria Azarenka to power back to claim her third major title (and second US Open), extending to an 11-match winning streak since the professional tour resumed in recent weeks.

The Japanese appears to be displaying a newfound resiliency on the court, as well as becoming vocal towards the various social justice causes which bled into global sport in recent months and using her platform to campaign for ‘Black Lives Matter’ as well as wearing face-masks noting the names of people who died in confrontations with police.

Speaking afterwards, Osaka said that her political statements were intended to incite debate.

“Well what was the message that you got was more the question. I feel like the point is to make people start talking,” she said at the presentation ceremony when asked about her motivations for the outspoken face coverings.

Elaborating further, Osaka said that she draws significant inspiration from Kobe Bryant and says that she hopes her actions both in and out of professional sport would have been endorsed by the former Los Angeles Lakers star.

“The quarantine definitely gave me a chance to think a lot about things, what I want to accomplish, what I want people to remember me by. I came into this tournament with that mindset. I think it definitely helped me out.

“I feel like at this point there are certain things that I do that I hope can make him proud,” she said.

Bryant, along with his daughter Gianna and seven others were killed in a helicopter crash in Calabasas, California on January 26.