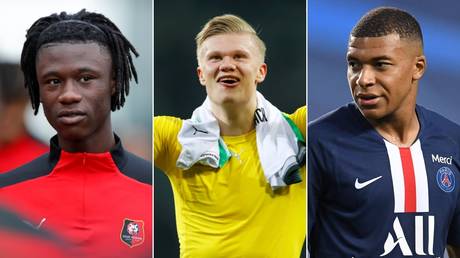 A transfer tug of war for the services of French superstar Kylian Mbappe looks set to begin in earnest amid reports that that the 21-year-old wants out of the French capital next summer.

Mbappe currently stands as the second most expensive transfer of all time when he joined Paris Saint-Germain from Monaco three years ago as he became the most expensive teenager in history for a reported fee in the region of $211 million.

But that fee may well be broken next summer after the Times reported that he has told the French club of his desire for a new challenge.

PSG are understood to be resistant to let Mbappe depart from the club and have made multiple lucrative offers to extend his contract past its 2022 expiration date.

These included promises to make him the club’s best-ever paid player, as well as a declaration that they will build the team around the French international.

However, the 2018 World Cup winner appears to be resolved in his desire to move to another European powerhouse, with the likes of Real Madrid, Manchester City and Liverpool thought to be circling.

For now, though, the club with the firmest interest in Mbappe appears to be Real Madrid who have shortlisted him with the intention of making him the latest ‘Galactico’ recruit as Zinedine Zidane looks to build upon the club’s first La Liga crown since the 2016/17 season.

Mbappe is understood to have informed PSG director Leonardo of his intention to leave, allowing the club to recoup a transfer fee next season. He would be available on a free transfer in 2022 if he doesn’t extend his deal and a transfer away isn’t completed in a year’s time.

The 35-times capped French international has very much delivered on his potential, scoring an impressive 77 goals in just over 100 appearances for the Ligue 1 champions.

In addition to Real Madrid, Pep Guardiola’s Manchester City are among the clubs who could bankroll a deal for the player, while Liverpool have also been mentioned in the press as a potential destination after Mbappe publicly lauded the job that Jurgen Klopp has done on Merseyside.

So, unless an accord is achieved between Mbappe and PSG it looks as though Lionel Messi won’t be the only high-profile player to be on the market next summer – leading to what could be an entirely different complexion among some of Europe’s top clubs.