'I want to be a role model': UFC's Mike Perry vows to be 'better all round' for 'queen' girlfriend after restaurant punch-up 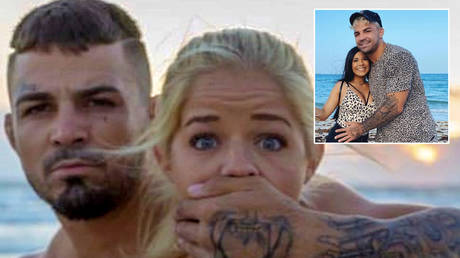 Less than a month after punching an elderly man to the floor in the latest violent incident of his controversial career, UFC welterweight Mike Perry has promised to become a reformed character for his newly-expectant partner.

Perry has kept a low profile and been ordered to seek help by UFC president Dana White since the shocking skirmish in a Texas restaurant, when new girlfriend Latory Gonzalez was among the onlookers unable to calm him down before he hospitalized a man in an altercation caught on camera.

The 28-year-old said he would seek treatment for alcohol abuse and behavior problems in the aftermath of the scandal, which he had preceded by sharing a video of himself knocking out a man outside a Florida nightclub.

Perry has now pledged to reverse his behavior at the end of a week in which he announced that he is about to become a father for the first time, revealing that Gonzalez is pregnant with a boy in a ceremony filmed on a beach.

I want to be a better role model for my family. For my unborn son. My Queen @latory_g and for myself so I can earn the respect I deserve. To my sponsors and my bosses at @ufc I want to apologize for how my actions have impacted our relationships. I will be better all around #Oss

“I want to be a better role model for my family,” he announced in an unusually contrite post to his following of more than 123,000 on Twitter. “For my unborn son, my Queen and for myself so I can earn the respect I deserve.

“To my sponsors and my bosses at UFC, I want to apologize for how my actions have impacted our relationships. I will be better all around.”

‘Platinum’ did not reply to an MMA fan who asked whether he had a plan to improve through interventions such as anger management sessions, and did not remove his tweets from early last month in which he warned people who did not stay six feet away from him that they would be “sparta kicked in the nuts and f*ckin stone cold stunnered, b*tch.”

He wrote on the same day: “I hope judgement day is coming. I hope all you filthy mouth losers burn in the shithole sewers of hell.

“All you will see, smell and hear is nightmares of vomit and faeces drowning you for eternity. Your life sucks so you hate on beauty you will never have but it will only get worse.”

Respect but do you have any plans on actively doing this? Such as anger management or ect?

Bro at this point your a joke!🤦🏽‍♂️

His tweets took on a different tone on Friday, calling Gonzalez, who is now acting as his lone cornerman in fights, “so beautiful.”

“It’s all thanks to coach,” he declared.

He had earlier warned people to “mind your own damn business” or risk being “struck by lightning” and later said that his next two fights would be against “people who’ve called me out”, labeling his critical rivals a “bunch of haters”.

Don’t care where you’re from. Mind your own damn business. If you wanna act like you know enough of my situation to include yourself then you just might get struck by lightning ⚡️

Also my baby mama @latory_g is laying next to me just looking so beautiful. I’m gonna rub her belly and kiss her goodnight cuz I’m living my best life.

Next couple fights are people who’ve called me out lol how much have I been called out lately. Bunch of haters and they can all get this work boi ! @ufc

MMA lightweight Anthony Taylor told Perry to stop using the word “n*****”, which he was heard repeatedly shouting during his restaurant ruckus, adding: “Bro, at this point you’re a joke.”

Danielle Nickerson, who married Perry at the end of 2019 and divorced him earlier this year, revealed this week that she had sought a restraining order against him for alleged threats of physical harm.

The tennis player posted an image of herself being gagged by an angry-looking Perry on a beach, adding that she was ready to “be brave and tell the truth” about her experiences during their long relationship and brief marriage.

Perry did not reply to her post, having issued only a “no comment” response when footage of his row at the restaurant made headlines.