As rain falls & holiday season begins, Khabarovsk protests start to peter out. But thousands still march in support of ex-governor 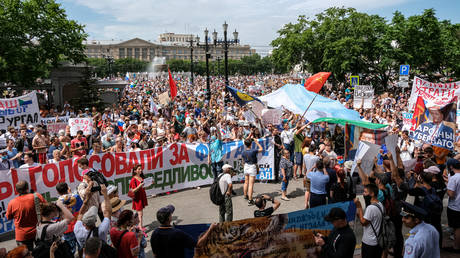 Residents of the Far Eastern Russian city of Khabarovsk took to the streets for the 22nd day in a row, as thousands of locals protested against the arrest of former Governor Sergey Furgal, accused of ordering killings in the 2000s

But the crowd was significantly smaller than in previous weeks. Around 3,500 people gathered in the center of the former Far Eastern capital, according to official estimates of the regional government. This contrasts with an implausible opposition claim that 90,000 took part last week, although other sources put it at 15,000-20,000.

Despite inclement weather, protesters marched through the city’s central streets, holding banners in support of Furgal – a member of the far-right LDPR.

Former Governor Furgal was arrested on July 9 on suspicion of ordering two successful murders, and a third failed murder, in the mid-2000s. He was immediately taken to Moscow, where he is currently held at the city’s Lefortovo pre-trial detention center.

In Khabarovsk, many locals are furious that their elected leader was removed by federal authorities, and flown over 6,000km to the far-away national capital.

Furgal, a highly popular politician in the Far East, became the governor of Khabarovsk Region in 2018, defeating competition from the ruling United Russia party. His popularity continued throughout his governorship, and last year his LDPR obtained a landslide victory in regional parliament elections.

Protestors in Khabarovsk demand that Furgal receive an open, fair trial in the region he once represented. Residents of other Far Eastern cities also came out in support of the arrested politician, with small demonstrations occurring in the cities of Vladivostok and Komsomolsk-na-Amur.

After four weekends in a row, it appears that residents of Khabarovsk might be losing interest in rallies which seem to be going nowhere. Local website DVhab.ru noted that “there are fewer protesters than in previous Saturday’s protests,” which had an estimated 15,000-20,000 attendees.

On July 20, President Vladimir Putin announced that he was appointing Mikhail Degtyarev, an MP from the same party as Furgal, as the interim governor. Many in Khabarovsk are upset that the new man isn’t local – he comes from Samara, 5,000km away. His appointment further angered some residents, who saw his selection as a political favor to the party, and not in the best interests of the region.