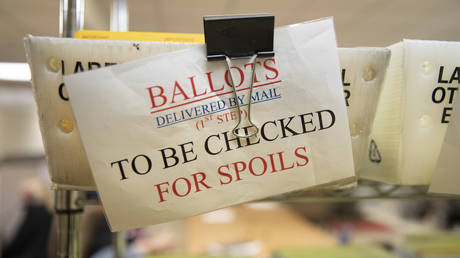 An Atlanta family was surprised to receive a voter registration application in the mail for their long-dead pet cat – and the state government is wondering what other kind of fraud “out-of-town activists” are up to in Georgia.

Cody Tims, a beloved pet cat who was a venerable 18 years old when he died 12 years ago, received an application to register for mail-in voting earlier this week, according to his owners, Ron and Carol Tims – providing serious ammunition to opponents of mail-in voting for November’s presidential election.

While the Tims seemed to laugh off the voter outreach to their dead pet, calling Cody a “DemoCat” and suggesting the “brilliant” feline would have voted “party with qualifications,” the Georgia Secretary of State wasn’t so quick to dismiss the bizarre mailing, releasing a statement on Friday warning “this office is dedicated to investigating all types of fraud.”

“Third-party groups all over the country are targeting Georgia to help register qualified individuals,” the office said, adding that this incident “makes you wonder what these out-of-town activists are really doing.” However, the office also sought to downplay potential repercussions, pointing out that Cody (or presumably a younger, livelier cat using his name) wouldn’t be able to vote without a license or state ID.

While Democrats have long denied voter fraud is a significant problem in the US and have cited the coronavirus pandemic as reason for switching to mail-in voting in November, the Trump administration has decried that effort as tantamount to suborning voter fraud, warning any mail-in election would be rife with fakery as it would eliminate any ability to verify voters’ identity. Following his 2016 electoral victory, Trump declared voter fraud “very, very common” and attributed Clinton’s popular vote win to heaps of “dead people” and undocumented immigrants voting.

….Absentee Ballots are fine because you have to go through a precise process to get your voting privilege. Not so with Mail-Ins. Rigged Election!!! 20% fraudulent ballots?

Earlier this week, a West Virginia mailman was hit with voter fraud charges over allegedly altering multiple registration forms’ political party affiliation. Last month, four New Jersey men, including two representatives of local government for the city of Paterson, were charged with several counts of voter fraud, including stealing and falsifying ballots. Earlier this year, Allegheny County in western Pennsylvania was sued for allegedly including nearly 1,600 dead people on its voter rolls and some 7,500 duplicates registrations, with one out-of-state resident registered to vote an eye-popping seven times. A 2012 investigation found that over 1.8 million dead Americans were registered to vote.