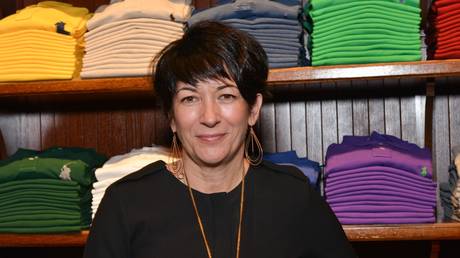 Ghislaine Maxwell, currently awaiting trial for allegedly acting as deceased pedophile Jeffrey Epstein’s pimp, has asked to be released on bail, claiming that she’s at risk of catching the coronavirus in her jail cell.

Maxwell’s arraignment hearing is scheduled for Tuesday. Though prosecutors have deemed her an “extreme” flight risk, Maxwell’s lawyers requested on Friday that she be released on a $5-million bond, on the condition she surrender her passports, submit to electronic monitoring and hire a security detail.

Her continued detention at Brooklyn’s Metropolitan Detention Center, they argued, puts her at “significant risk” of catching the coronavirus, which has already infected 55 inmates and staff at the jail.

$5 million might be a small change to Maxwell, who was able to buy her million-dollar New Hampshire hideout in cash last year, and since 2016 operated more than 15 different bank accounts with balances of between $100,000 and $20 million, at least according to prosecutors.

Still, her lawyers argued that she should be let out, as she “is not Jeffrey Epstein.”

Epstein made a similar request for bail after his arrest last summer, requesting that he be placed under house arrest with security paid out of his own pocket. Epstein offered up his $77-million New York mansion and private jet as collateral, but the request was denied, and Epstein was found dead in his Manhattan jail cell a month later, his suspicious death ruled a suicide.

Maxwell’s alleged offenses are every bit as serious as Epstein’s. The disgraced socialite is charged with six federal crimes, including enticement of minors, sex trafficking, and perjury. According to her indictment, Maxwell “assisted, facilitated, and contributed to Jeffrey Epstein’s abuse of minor girls,” luring and grooming victims as young as 14 years old.