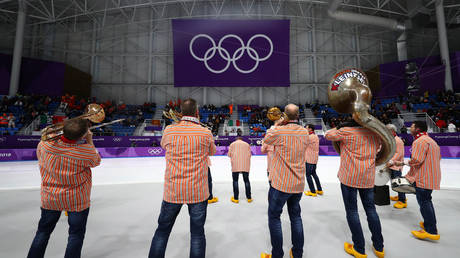 Russia will continue to cultivate sporting ties with its allies while the “discriminatory” international bans placed on the country’s athletes have not been effective, according to Russian Deputy Prime Minister Dmitry Chernyshenko.

Chernyshenko, who is a key sports figure in his homeland, commented as Russian athletes continue to be sidelined from major international tournaments because of the conflict in Ukraine.

Russia has also been stripped of numerous showpieces it was due to host in a variety of sports.

“The main thing is that the discriminatory policy towards Russian athletes did not bring effective results. When the puppets deprived us of competitions, they lost their appeal and objectivity,” said Chernyshenko at the forum ‘Russia – A Sporting Power’, which is being held in the region of Kemerovo.

Chernyshenko was among the key organizers of the 2014 Sochi Winter Olympic Games, but was stripped of his Olympic Order back in February along with President Vladimir Putin following the launch of Moscow’s military campaign in Ukraine.

Chernyshenko noted that even amid the bans on Russian athletes levied at the recommendation of the International Olympic Committee (IOC), Russia continued to develop sporting ties with “friendly” countries.

“We do not close ourselves off from international contacts, we cooperate with friendly countries from the BRICS (Brazil, Russia, India, China, South Africa), SCO (Shanghai Cooperation Organization) and CIS (Commonwealth of Independent States),” Chernyshenko said.

Chernyshenko has previously accused the IOC of seriously undermining sport with its recommendation for a ban on Russian and Belarusian athletes.

“The IOC has opened a Pandora’s Box to be exploited by historical revisionists, and all sport should be concerned by its eager willingness to do so,” Chernyshenko said back in March.

Also speaking at the ‘Russia – A Sporting Power’ forum this week, Russian Sports Minister Oleg Matytsin said that by removing the country from the list of major tournament hosts, international federations have lost a rare partner who could be relied upon.

“Reliable partners such as Russia can be counted on the fingers of one hand. We’ve held a huge number of competitions at the highest level,” said Matytsin.

“You can compare the suspension (of Russia from competitions) with suicide. I hope that reason will prevail.”

Matytsin noted that Russia has hosted major spectacles in recent years such as the 2014 Sochi Winter Games, the 2018 FIFA World Cup, and matches at the 2020 UEFA European Championship.

The current sanctions have meant Russia has been stripped of events such as the 2022 UEFA Champions League final.

The match was due to be held in St. Petersburg in May but was relocated to Paris, where it ended up being marred by ugly scenes involving football fans and local police.

The 2022 Volleyball Men’s World Championship was also relocated away from Russia, as were the men’s and junior 2023 World Ice Hockey Championships.