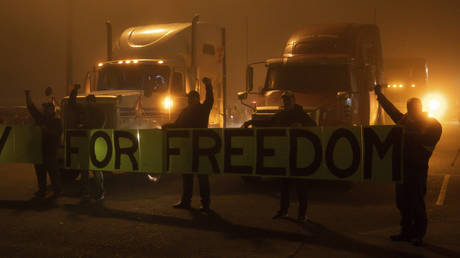 Canadian Prime Minister Justin Trudeau argued on Wednesday that a convoy of up to 50,000 truckers protesting Covid-19 vaccine mandates in the country are a “fringe minority” with “unacceptable views.”

Trudeau made his comment ahead of a trucker protest scheduled to take place in Ottawa this weekend.

“The small fringe minority of people who are on their way to Ottawa, who are holding unacceptable views that they are expressing, do not represent the views of Canadians,” the PM said in a televised speech.

Trudeau argued that the majority of Canadians disagree with the protesters and “know that following the science and stepping up to protect each other is the best way to continue to ensure our freedoms, our rights, our values as a country.” He claimed that “close to 90%” of truckers had already been vaccinated.

The Freedom Convoy – the organization which spearheaded the protests – claimed that some 50,000 heavy trucks have already joined the procession bound for Ottawa, while they initially expected the convoy to consist of about 1,600 trucks. The truckers are opposing a vaccine mandate which requires them to be fully vaccinated or face a 14-day quarantine every time they cross the border with the US.

Singh accused the campaign of holding “extremist and dangerous views,” and criticized his brother-in-law, Jodhveer Singh Dhaliwal, for donating $13,000 to the protest.

Singh’s brother-in-law allegedly initiated a process for his donation to the protesters to be returned after he was informed of “the true nature of this organization,” reports said.

American crowdfunding platform GoFundMe removed a fundraiser for the protesters this week after it raised more than Can$5 million.