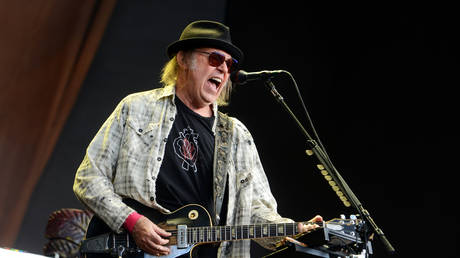 Spotify announced it has begun removing Neil Young’s music on Wednesday, following the musician’s criticizing the streaming service for “spreading false information about vaccines” via its #1 podcaster Joe Rogan’s show.

“We regret Neil’s decision to remove his music from Spotify, but hope to welcome him back soon,” the streaming service told Variety on Wednesday, explaining they had “detailed content policies in place” to prevent the spread of Covid-related misinformation and had removed a total of 20,000 podcast episodes under those policies since the start of the pandemic.

In an open letter on Monday, which he has since deleted, Young asked his agents at LookoutManagement and corporate leadership at Warner Bros. to notify the platform that he was “actively canceling” his “music availability.” He accused Spotify of “spreading false information about vaccines – potentially causing death to those who believe the disinformation being spread by them.”

“They can have Rogan or Young. Not both,” the 76-year-old rocker wrote, referring to an exclusive multi-million deal Rogan struck with Spotify in 2020.

In a follow-up statement on Wednesday, Yong doubled down on his disinformation claim, mentioning a letter by 200 doctors that demanded Spotify remove Rogan’s show.

Young’s music would still be available on other streaming platforms as well as on his own website Neil Young Archives for between $19.99 and $9.99 per year.

The rocker has removed his music from Spotify before, yanking his catalog from all streaming services in 2015 over what he said was poor sound quality and pitching his own “high-quality” music player, Pono, instead. He shut it down in 2017 to sell his music on his website and his songs eventually returned to streaming services.