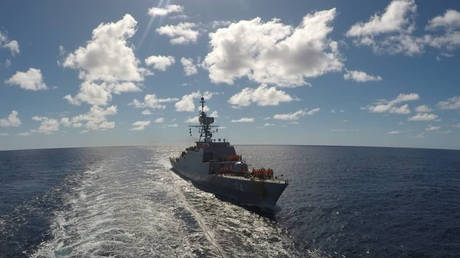 Defense Secretary Lloyd Austin said two Iranian vessels transiting the Atlantic toward Latin America are a “great concern,” despite reports that the Pentagon has no plans to intercept the ships or even monitor them more closely.

Asked about the two Iranian ships, which US officials allege are headed for Venezuela to fulfill a weapons sale inked last year, Austin told lawmakers that he shares their concerns, suggesting they pose a proliferation threat in the Western Hemisphere.

“I am absolutely concerned about the proliferation of weapons, any type of weapons, in our neighborhood,” he said during a Senate Armed Services Committee hearing. “The precedent of allowing Iran to provide weapons to the region causes me great concern.”

The ships’ voyage marks the first time the Iranian Navy has entered the Atlantic successfully, reaching the ocean after a 30-day journey.

Austin declined to say what weapons they might be carrying, telling Senator Richard Blumenthal (D-Connecticut) he would have to field that question in “another forum,” off the record.

A Wednesday report in Politico said one of the vessels is likely loaded with fast-attack boats destined for Venezuela, citing anonymous intelligence officials. The outlet also suggested they could carry long-range missiles based on previous claims by the Donald Trump administration about a planned sale last summer, though the officials cited no evidence at the time.

While the Pentagon head voiced grave concerns about the Iranian ships, another unnamed defense official indicated a lack of urgency among the military, telling Politico on Thursday that there are currently no plans to “conduct an intercept in international waters,” nor to even “monitor the ships more closely.”

Nonetheless, senior Pentagon figures said the delivery of weapons to Venezuela would be a “provocative act” and a “threat to our partners in the Western Hemisphere,” claiming Washington reserves “the right to take appropriate measures” to stop the alleged arms sale.

Top lawmakers have taken much the same stance, with Senator Marco Rubio (R-Florida), vice chair of the Senate Intelligence Committee, insisting Venezuela should “unconditionally turn [the ships] around, or we should force them to turn around.”

After questioning Austin, Senator Blumenthal said an Iranian arms sale would set a “pretty alarming” precedent, adding it could be a “first testing blow” by the Islamic Republic “as to whether they can get away with it and make mischief.”

Throughout the Trump administration, officials repeatedly singled out Iranian fuel shipments to Venezuela, with the military even seizing four tankers bound for the Latin American nation last year. As both countries remain heavily sanctioned by Washington, President Joe Biden has also apparently taken interest in the petroleum sales, with his State Department saying it is “aware” of the shipments and would “continue to monitor the situation” earlier this year. The department, however, declined to say at the time whether it would carry out another seizure in the future.