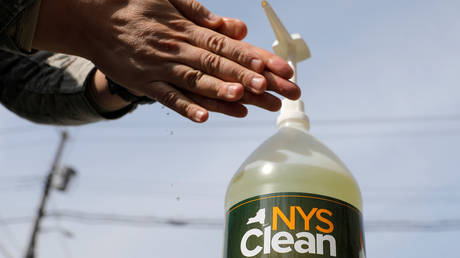 Beloved US talk show legend Larry King has died in hospital at the age of 87 following a long illness, his family confirmed. The veteran interviewer won stacks of awards during his career and hosted RT America’s Politicking show.

King was admitted to hospital after reportedly suffering heart problems. The host had spent his 87th birthday, which fell on November 19, in hospital, but thanked fans and well-wishers “for all the kind birthday messages” on Twitter that day.

The renowned conversationalist and household name had been suffering from heart disease for decades and even penned two books describing life with the condition. In November 2019, he suffered a near-fatal stroke and later announced he’d spent “a couple weeks” in a coma.

Starting in Florida as a local journalist and interviewer back in the 1950s, King first came to national prominence as the host of The Larry King Show – a nationwide all-night call-in radio show in 1978.

He later hosted the internationally-known Larry King Live show on CNN for 25 years between 1985 and 2010, interviewing a wide range of personalities, from movie stars to prominent politicians, discussing everything from their personal lives to breaking news stories.

In 2012, he co-founded a New York-based production company, Ora TV, and started hosting his Larry King Now show there. A year later, RT America struck a deal with Ora TV to host King’s show. At that time, Larry King said he “would rather ask questions to people in positions of power instead of speaking on their behalf.”

Since then, King has been the host of the Larry King Now podcast and the Politicking show broadcast by RT America.

Over his lifetime, King was the recipient of more than a dozen media awards, including two Peabody awards for excellence in broadcasting in 1982 and 1992 as well as an Emmy Award and 10 CableACE awards for Best Interviewer, as well as Best Talk Show Series.

Outside of his storied media career, King was also involved in charity work. After he suffered a heart attack and underwent a quintuple bypass in 1987, he founded the Larry King Cardiac Foundation which has paid for life-saving cardiac procedures for people who could not afford them, and promotes healthy lifestyle habits.

King married eight times during his life, filing for divorce from his latest wife Shawn Southwick, in 2019. He was father to five children and had nine grandchildren and four great-grandchildren.

Two of King’s own children, Andy King and Chaia King, died within weeks of each other in July and August of 2020, one from a heart attack and another after a battle with lung cancer.

Asked about his views on his legacy in 2014, King said he would have liked to be remembered as a person that “led to more people having information that they didn’t have before.” He said he wanted people to remember him as someone who “taught us a lot” in an enjoyable way and who “brought a great deal of pride to his business.”