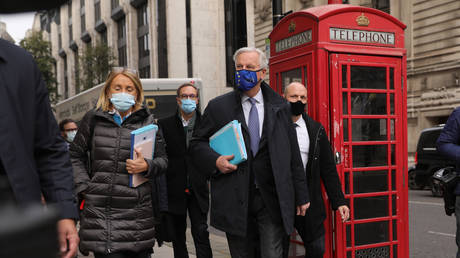 European Union chief negotiator Michel Barnier plans to travel to London to try and reach a Brexit trade deal, but British PM Boris Johnson has warned that substantial and important differences have yet to be bridged.

“Same significant divergences persist,” Barnier confirmed in his tweet, adding, however, that he was “travelling to London this evening to continue talks.”

“My team and I are no longer in quarantine,” Barnier said, citing Belgian health rules. “Physical negotiations can continue.”

The talks had been suspended after one EU negotiator tested positive for Covid-19 earlier this month.

Barnier briefed envoys of the 27 EU states and members of the European Parliament on Friday, and an EU diplomat said after the closed-door meeting that time was short for the talks on future ties between Brussels and London.

“Without London taking the necessary decisions quickly, reaching a deal will be all but impossible. Time is running out quickly. There are only a few days left for further negotiations.”

The gaps in the talks, which relate to ensuring fair competition, governance and fisheries, “remain large,” the diplomat noted, as Brussels wants London to work swiftly to break the existing deadlocks.

After the UK formally left the EU on January 31, the country has been in a one-year transition period, and rules on trade, travel and business have to be changed as soon as possible.

However, British Prime Minister Boris Johnson said on Friday that the main sticking points in the talks have not been yet overcome.

“Clearly there are substantial and important differences still to be bridged but we’re getting on with it,” he told reporters. “The likelihood of a deal is very much determined by our friends and partners in the EU.”