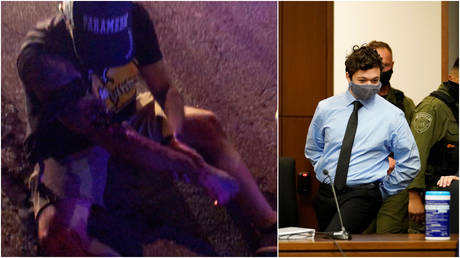 Rep. Alexandria Ocasio-Cortez (D-New York) and other liberals have pointed to Kyle Rittenhouse’s $2 million bail and release as an example of white supremacy in the justice system.

“Does anyone believe Rittenhouse would be released if he were Muslim & did the same thing in a diff context?” Ocasio-Cortez tweeted on Saturday.

Rittenhouse’s expensive release is proof of “systematic racism,” according to the congresswoman.

“For people who say ‘systemic racism doesn’t exist,’ this is what it looks like: protection of white supremacy baked deep into our carceral systems,” she wrote.

Does anyone believe Rittenhouse would be released if he were Muslim & did the same thing in a diff context? For people who say “systemic racism doesn’t exist,” this is what it looks like: protection of white supremacy baked deep into our carceral systems.

Ocasio-Cortez is far from the only outspoken liberal to use Rittenhouse’s release to push arguments about racism in the US’ justice system.

“White supremacy is the sickness of America,” he added.

Kalief Browder killed himself after he was released, a result of the immense trauma and pain he endured in prison. Meanwhile, Kyle Rittenhouse a murderer is made into a hero. White Supremacy is the sickness of America. https://t.co/uLkrPd9D88

There are people sitting in jail for less severe charges than what Kyle Rittenhouse faces but can’t afford to get themselves out.

Bail has everything to do with having access to money than it is preserving public safety.

Imagine if Kyle Rittenhouse was a Muslim… https://t.co/C8rB4g4XTE

Let this sink in America. This whole system is corrupt. I don't know how you rebuild it without completely dismantling it. It has to be blown up. It is corrupt at its core. Racism is its foundation & DNA. #KyleRittenhouse #ProudBoys #WhiteSupremacy #TwoAmericas #ThisIsAmerica ✊🏾 https://t.co/ymoPz97BNb

Rittenhouse is charged with first degree murder over the fatal shooting of two during anti-police brutality protests in Kenosha, Wisconsin over the summer. Rittenhouse will appear back in court in December and maintains that he acted in self defense.

“I feel I had to protect myself,” he told The Washington Post about the shooting. “I would have died that night if I didn’t.”

Rittenhouse said he was carrying a gun for protection on the night of the shootings, but intended only to provide medical care for those who got injured during the demonstrations, as well as to protect businesses from looting and vandalism.

In regards to the shooting incident, Rittenhouse has claimed he was defending a business from rioting protesters when he was attacked.

The 17-year-old has not been without support. Supporters claim the teenager acted in self defense, and his bail was partly funded by My Pillow CEO Mike Lindell and actor Ricky Schroder, both of whom received pushback on social media for their involvement with Rittenhouse.

White supremacy will always protect white bodies, even at the expense of our community’s safety, or even their own well-being.

White men are entitled because white supremacy always bails them out, they don’t get to experience consequences.https://t.co/LNpqzQfV38

I would never allow a My Pillow anywhere near my house. I don't know how to boycott Ricky Schroder. https://t.co/xQMPZJdgzb