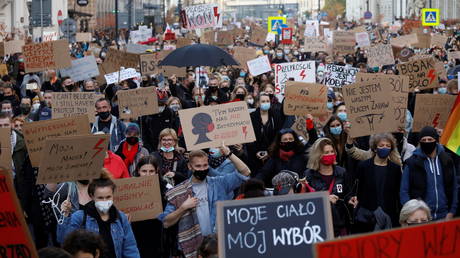 The police and military have brought in reinforcements as crowds of people gather in the Polish capital from all over the country for the biggest demonstration of the week to protest against a court ruling on abortion.

Poles from across the nation gathered in the capital on Friday evening to oppose a court ruling that introduced a near-total ban on abortion in the mainly Catholic country.

Friday’s protest, organized by the National Women’s Strike, is reported to be the biggest in a weeklong spate of activism, with men and women coming together under the slogan “March to Warsaw.”

Police and military reinforcements were drafted in to secure the city in the anticipation that local police forces will be stretched.

“We will keep an eye on those places where the law has so far been broken, property destroyed, and inscriptions painted on the facades of churches. We expect the largest protest since the announcement of the Constitutional Tribunal’s verdict and we are preparing for it,” said Warsaw Chief of Police, Sylwester Marczak.

i have no words, this is happening now in warsaw pic.twitter.com/hBoxBZtLLg

Demonstrations have escalated throughout the week, with tens of thousands flooding the capital and other cities on Thursday.

Earlier in the week, activists interrupted Sunday mass, holding pro-abortion banners and staging sit-ins. On Tuesday, opposition politicians led by Joanna Scheuring-Wielgus of the Lewica (Left) party, took to the floor of parliament wearing masks and T-shirts bearing the lightning bolt symbol of the ‘Women’s Strike’ movement. They also held up placards saying, “this is war” and “legalize abortion.”

Deputy Prime Minister Jaroslaw Kaczynski criticized the protestors on Tuesday and called on people to defend the nation’s churches at all costs.

The protest on Friday is the eighth consecutive day of anti-abortion law activism since the constitutional court closed one of the few remaining grounds for abortion on October 22. It is now only legal for an abortion to take place in cases of rape, incest or to protect the life of the mother.