Covid-19 as deadly for nurses as World War I, with fatalities from virus matching deaths during four-year war 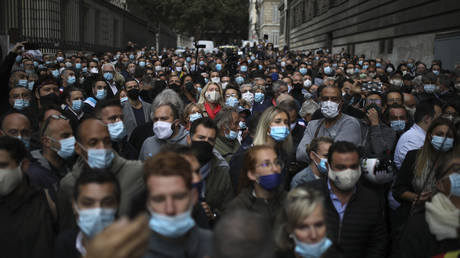 As many nurses have died from Covid-19 as during the whole of World War I, the International Council of Nurses (ICN) has said, adding that health worker fatalities in the pandemic were likely hugely under-reported.

At least 1,500 nurses have lost their lives since the novel coronavirus outbreak was first reported in China’s Wuhan some 11 months ago, according to ICN figures. The same amount is believed to have been killed during World War I, which lasted for four years between 1914 and 1918.

“The fact that as many nurses have died during this pandemic as died during World War I is shocking,” ICN head Howard Catton said during an online conference earlier this week.

However, the council believes that the actual numbers of Covid-19 deaths are far greater than what is currently registered, as the data on fatalities among nurses was only available from 44 countries.

It’s a “scandal” that a systematic and standardized collection of data on coronavirus infections and deaths among healthcare workers hasn’t yet been implemented internationally, Catton said, adding that his organization had been calling for this for months.

Analysis by ICN suggests that 10 percent of those infected with the virus are medical workers. Judging by the number of Covid-19 cases worldwide and the death rate, it is estimated that over 20,000 healthcare workers could have succumbed to the disease to date.