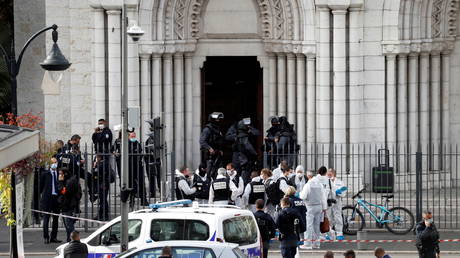 Foreign Minister Jean-Yves Le Drian has warned that French citizens face a security risk “everywhere,” after three people were murdered in a suspected jihadist attack at a church in Nice.

On Friday, a day after he stated that France is a “country of tolerance” that extends “a message of peace to the Muslim world,” Le Drian issued the warning to his fellow citizens, particularly individuals who are abroad.

The remarks came as Interior Minister Gerald Darmanin warned of the danger of more attacks inside France, adding that the country is “in a war” against Islamic extremism “inside and outside,” following the murder of three individuals in a suspected terrorist attack at Nice’s Notre-Dame basilica on Thursday.

The Foreign Ministry had issued safety advice on Tuesday to its citizens in a number of Muslim-majority countries around the world, including Bangladesh, Indonesia, Iraq, Mauritania and Turkey, advising them to “exercise the greatest vigilance” and avoid any protests and public gatherings.

That move in itself came in the wake of a backlash in several Muslim countries to President Emmanuel Macron’s clampdown on Islamic extremism following the beheading of French teacher Samuel Paty last month. Paty had shown Charlie Hebdo cartoons of the Prophet Mohammed, which devout Muslims consider blasphemous, to pupils shortly before his murder.

Macron defended the publication of the cartoons as freedom of expression, prompting outcry and a boycotting of French goods by some Muslim states.

France was placed on its maximum security alert after the Nice attack, with Macron pledging to increase security patrols of French churches and schools, providing 4,000 more troops to protect them – raising the total number to 7,000.

The attack in Nice is the latest in a string of terrorist incidents in the country in recent weeks, following an attempted stabbing in Avignon on October 29, schoolteacher Paty’s murder near Paris on October 19, and the stabbing of four people outside the old offices of the Charlie Hebdo magazine in September.