"He didn't even trust me with a pen:" Russian tycoon Deripaska rubbishes Putin money laundering accusations 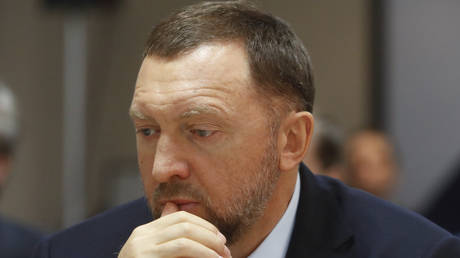 Billionaire Oleg Deripaska has poured cold water on American insinuations that he washed funds on behalf of President Vladimir Putin and other senior Russian officials.

According to Britain’s Financial Times (FT), Deripaska called the accusations “unsupported” and “just guesses, rumors and balderdash,” adding that if someone brought “something like this to a court in London … the judge would just tell them: ‘Please get lost.’”

On Friday, a letter written by the US Treasury’s Office of Foreign Assets Control (OFAC) was published by the FT, detailing the unclassified justifications of why the tycoon was sanctioned. The letter indicates six reasons, all of which include the word “reportedly” or “reported,” and provide no source or proof.

In April 2018, the US imposed penalties on a list of Russian oligarchs and top officials who were accused of “malign activity around the globe.” This new sanctions list included Deripaska, who founded RUSAL – once the world’s largest aluminum company.

Almost one year later, in March 2019, he sued OFAC in court, forcing the US Treasury Department to provide reasons for its decision to impose sanctions.

Deripaska is accused by the OFAC of financing “projects on behalf of President Vladimir Putin and senior Russian officials,” as well as canceling an IPO to “hide Russian President Vladimir Putin’s money laundering.” In addition, he is alleged to have been “holding assets and laundering funds” on behalf of Putin, and sending the president money for personal use, disguised as “business activity.”

Writing on his Telegram account, Deripaska added: “What money? He didn’t even trust me for ten minutes with a pen.” He was referring to a 2009 incident when Putin publicly humiliated the businessman after workers in the Leningrad region accused him of leaving their wages unpaid.

Back then an angry Putin famously lent a pen to the businessman, and then sternly demanded he return it.

The US also claims that Deripaska made an $800 million investment into projects around the 2014 Sochi Olympics, alleging that Russian oligarchs were “compelled” to do so by then-Prime Minister Vladimir Putin. Among other investments in the subtropical city, he owns the five-star Rodina hotel where rooms, even in the off-season, range in price from $450-$2,800.

The letter states that it contains only “releasable” and “non-privileged” information.

The president’s spokesperson, Dmitry Peskov, was quoted by the FT as saying, “That’s not true. As simple as that.”