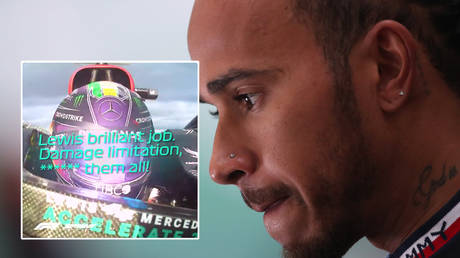 Formula 1 world champion Lewis Hamilton says he feels “uncomfortable” competing in Saudi Arabia this weekend because of the kingdom’s human rights record, but some fans have wondered why the Brit doesn’t just boycott the race.

With this season’s title set to go to the wire between reigning king Hamilton and challenger Max Verstappen, the F1 caravan rolls on to Saudi Arabia for an inaugural race on a new street track in Jeddah.

The Grand Prix is the penultimate one of the season and Red Bull racer Verstappen leads the way in the overall standings by just eight points from Mercedes star Hamilton.

But away from the racing, attention has been drawn to F1’s decision to stage a first-ever Grand Prix in Saudi Arabia, where there are stringent laws against homosexuality.

Seven-time world champion Hamilton has previously used his platform to speak out on causes such as Black Lives Matter, and wore a rainbow-themed helmet for the last Grand Prix in Qatar.

“Do I feel comfortable here? I wouldn’t say that I do,” the 36-year-old said when asked about racing in Saudi Arabia this weekend.

Hamilton described Saudi laws on homosexuality as “pretty terrifying” and said improvements were needed in areas such as women’s rights.

“There’s changes that need to be made. For example women’s rights of being able to drive [legally] in 2018, it’s how they are policed. Some of the women are still in prison from driving many, many years ago,” said the Mercedes hero.

“So there’s a lot of changes that need to happen and I think our sport needs to do more.”

Hamilton’s gestures in recent days have included posting a social media message of himself wearing his rainbow helmet, along with the message “equality for all.”

Many of his legion of fans have praised him for the move – but others have pondered why he doesn’t just pull out of the Saudi Grand Prix altogether if he feels so strongly.

“I’m sure he’ll get over it when he checks his bank balance,” added another sarcastically.

One fan added: “Is he being forced to drive against his will? How about just sit this one out?”

“Yeah if he’s so uncomfortable he should just stay home. It’s just a race,” agreed another fan.

“I’m sure wearing a rainbow helmet will mitigate betraying your principles,” read another scathing comment.

But elsewhere Hamilton earned applause, with fans claiming that his appearance in Saudi Arabia would at least draw attention to rights issues.

“He can refuse to drive and let the reserve driver race his car, but of course, he would lose the championship doing that, which he won’t risk,” came one reply.

Meanwhile, Hamilton’s stance has been supported by the likes of Haas driver Mick Schumacher – son of racing legend Michael.

He shared an image of himself in a rainbow-themed shirt with his social media following.

The four-time world champion, who currently drives for Aston Martin, said: “It’s true obviously if we look through a western-European lens there are lot of things that should be improved and have to be addressed.

“But it’s also true some things are changing and for those people it makes a big difference.

“It’s clear some things aren’t going the way they should but that’s our point of view. It’s also probably true that things take time and it’s progress.”