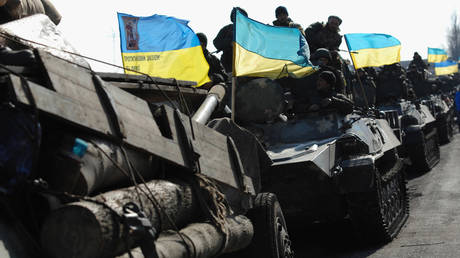 Russia may stage a large-scale military intervention in the Ukrainian region of Donbass at the end of January, and it could involve around 94,300 troops, Ukrainian Defense Minister Aleksey Reznikov claimed on Friday.

Speaking to parliament in Kiev, Reznikov said that his estimation of the time Russian forces could “reach escalation readiness” is the first month of next year and dubbed a military intervention a “likely scenario.”

The defense minister’s comments come amid increasing fears over an alleged military buildup on the Russia-Ukraine border. Suggestions of a possible armed conflict have been pushed by a number of Western media outlets, including America’s CBS News, which reported that a military incursion is increasing in likelihood “as the weather gets colder.”

The Kremlin has consistently denied that it is planning to invade Ukraine. However, on Thursday, Russian President Vladimir Putin’s press secretary Dmitry Peskov described “the probability of hostilities” as “still high.”

“This is a matter of particular concern and worry for us,” he said.

On the same day, US Under Secretary of State for Political Affairs Victoria Nuland warned that Moscow would see unprecedented sanctions if it used its military against Ukraine.

“We are resolute in sending the message to Moscow, that if it moves again to internally destabilize Ukraine or use these forces to enter the country, that it will be met with high-impact economic measures, the likes of which we have not used before, from all of [NATO],” she said.