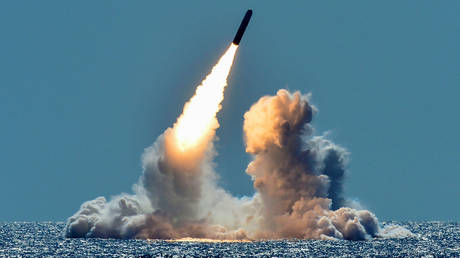 The US has completed the “first production unit” of its modernized B61-12 nuclear gravity bomb, set to replace the current aging models of the iconic B61, which has remained in service for more than 50 years.

The completion of the upgraded variable-yield nuclear bomb was announced by the National Nuclear Security Administration (NNSA) on Thursday. The “first production unit” (FPU) was put together on November 23, paving the way for mass-production of the modernized bomb, expected to begin in May 2022.

“With this program, we’re delivering a system to the Department of Defense that improves accuracy and reduces yield with no change in military characteristics, while also improving safety, security and reliability,” Department of Energy Under Secretary and NNSA Administrator Jill Hruby stated.

Last week, #NNSA successfully completed the B61-12 First Production Unit @PantexPlant. This is a huge milestone for stockpile modernization and demonstrates our Nation’s commitment to #nuclear deterrence. pic.twitter.com/90ojHPw6cH

The modernization effectively turns the free-fall bomb into an adjustable munition, as the new B61-12s come with a guided tail kit supplied by Boeing. The kit gives the bomb some capability to maneuver mid-air instead of simply falling to the ground.

The arrival of the first B61-12 is over a year late, as the modernization program, with an estimated cost of some $12 billion, ran into issues with capacitor components in late 2019. Back then, the NNSA discovered that the capacitors, used in both the B61-12 and the Navy’s W88 Alteration 370 warhead for submarine-launched missiles, could not meet the military’s specifications.

The new version of the iconic bomb is set to replace the B61-3, 4, and 7 models currently in the US nuclear stockpile. The only variant to remain in use alongside the B61-12 is the B61-11, a relatively modern bunker-buster modification of the bomb.

The US is expected to manufacture some 480 B61-12 bombs, according to estimates by the Federation of American Scientists (FAS), a Washington-based non-profit. The bomb is believed to have a variable yield ranging from 0.3 to 50 kilotons, making it a flexible weapon that can be used both for tactical and strategic purposes.

In comparison, the first nuclear bomb ever used by the US, which was dropped on the Japanese city of Hiroshima, had a yield of some 15 kilotons.