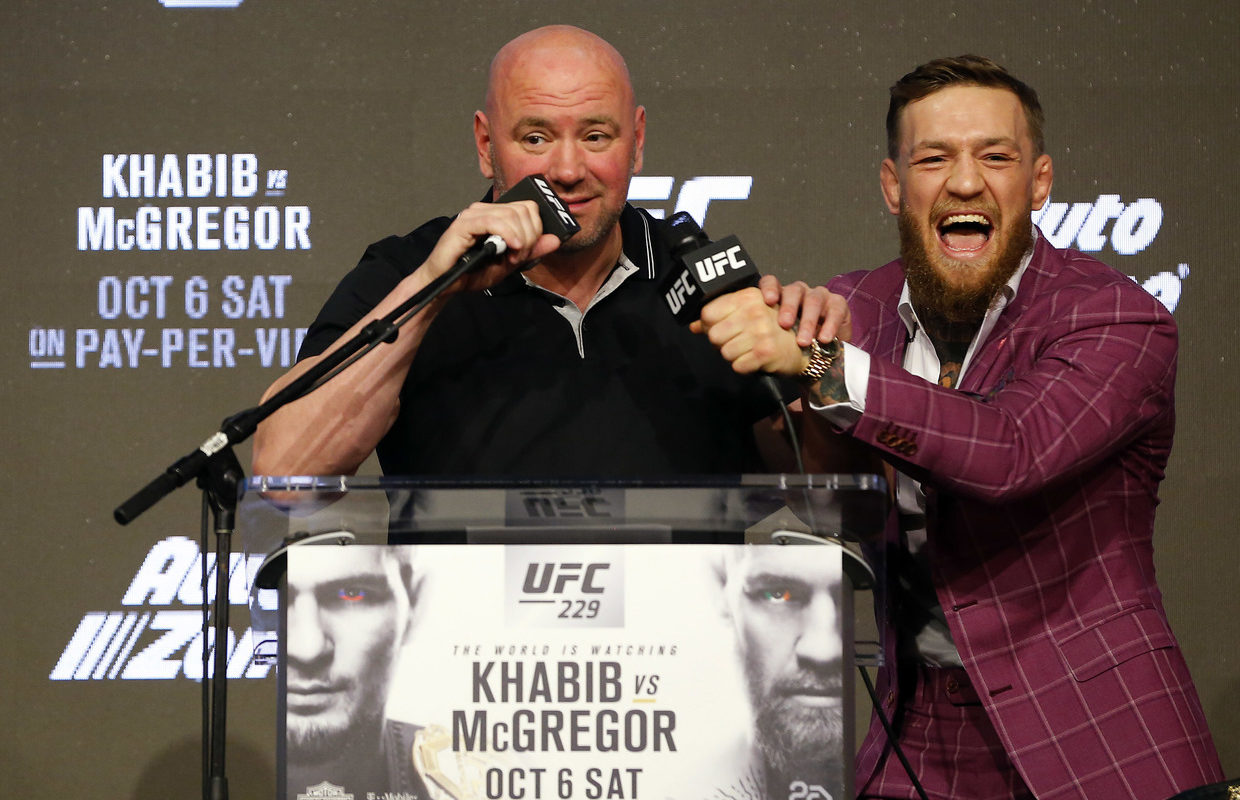 Conor McGregor and rapper Machine Gun Kelly have already defused the tensions which exploded on the red carpet at the MTV Video Music Awards and dragged in Megan Fox, according to UFC boss Dana White.

McGregor was seen lashing out at Kelly and hurling a drink in his direction after the rapper – real name Colson Baker – allegedly refused to take a picture with him.

The livid Irishman was restrained by security as Hollywood actress Megan Fox, who is Kelly’s girlfriend, was also caught up in the scenes.

McGregor swinging on MGK has to be added the the list of all-time #VMAs moments pic.twitter.com/F0A9Bbzz5J

Conor McGregor out here trying to fight Machine gun Kelly after he denied to take a picture with him 🤣🤣🤣🤣🤣😭😭😭😭😭 #VMAs #ConorMcGregor #MGK pic.twitter.com/qXnfvCHWCa

Conor McGregor throws a drink at MGK on the red carpet (via ig:laurademytrk) pic.twitter.com/H0naCNbMta

McGregor’s team later denied that a snubbed photo request had been the cause of the scuffle, while the former UFC champ derisively dismissed Kelly as “a little Vanilla Ice white rapper.”

“I don’t even know the guy. I don’t know anything about him, except that he’s with Megan Fox,”

Some of the fighting community online called out McGregor for the scenes, claiming he was losing the plot.

“Conor has lost his f*cking mind! You gotta be a family member to respect that man as a human anymore. He is proof money can’t buy class,” wrote former UFC fighter Mike Swick.

But according to UFC boss White, the situation has already been resolved between the pair.

“I talked to both, actually. They’re all good now. A misunderstanding, or whatever it was,” White told reporters after Tuesday’s ‘Dana White’s Contender Series’ event at the UFC Apex in Las Vegas.

“Guys, this is the fight business. I got 700 f*cking lunatics under contract here. What do you guys think, these are the things that happen sometimes. This isn’t Microsoft. We’re in a crazy f*cking business here,” White added.

“There’s all the sh*t that you guys know about because it happens in public. Nevermind the sh*t you don’t know about that happens every day.”

McGregor appears to have put the row behind him, posting relaxed pictures with his family in Beverly Hills as he continues his recovery from the broken leg he suffered in his last Octagon appearance against Dustin Poirier.

However, some companies are already touting betting lines for a potential showdown between McGregor in the ring or cage, with the Notorious unsurprisingly starting as heavy favorite against the 31-year-old musician.

You can now bet on Conor McGregor vs. Machine Gun Kelly in a potential celebrity boxing match 🥊